When we have decided to make an investment then we need to perform an analysis work so that we do not be stuck with the wrong investment avenues or at the wrong time. For making an analysis, we must need to focus on a few points.

Profitability – how the company performs? Return on invested capital, margins, growth in sales-profits, earning per book value, etc. If the profitability of the company gets hampered then we need to check whether it is permanent or temporary.

Stability – earning of the company decline in any of the years from the past ten years? Do the earnings of the company get fluctuations? Does a company involve in a seasonal or cyclical business?

Growth – companies with higher growth command for the high multiples and lower growth with low multiples. The growth of the company can help us to grow our wealth also. The growth provides an opportunity for the company to use capital appropriately.

Financial position – liquidity ratio, the position of a balance sheet, debt, preference share, etc. Tree does not grow in the sky. If financials are not strong then the business will not be surviving for a longer period. So that we need to put emphasis on the financial. How does a company utilizing assets? Company is capital intensive or asset-light? Working capital intensive or negative cash conversion cycle?

Also, we need to check what the company is doing with the capital generated. What is the capital allocation decisions of the management? Long dividend track record, increment into the dividend, buyback, buyback at higher than intrinsic value or lower than intrinsic value and if a company requires fund for growth then reinvest profits for growth rather pay dividend or buyback.

Many of the companies having smart enough management who know that analysts and the majority of investors focus on the bottom line so that they also emphasize the boosts earning at any means. Manipulating earnings for the few years can reward them a better way by offloading their stakes. Thus, we require to study earnings quality by putting a huge emphasis.

I have a different series under the “Simple is Better” category which covers tricks to identify earning manipulation.

Management of companies can be hungry for getting recognition which makes them involved in the playing with the earnings. We should not focus on the short-term earnings or one year earning for deciding for investment purpose otherwise we can be stuck into the trap. We need to focus on the footnotes for understanding properly for onetime earnings. Whether such earning will be going to recurring or one time? We also can perform an adjustment to the one time earning and need to check that still stock available at cheaper multiple or not. Does the company involve the frequent selling off assets for boosting profits? Does Company has change revenue recognition policy, change other accounting policy? Does the Company involve accounting shenanigans? When things available at dirt cheap then first need to check it thoroughly that why such cheapness is available with the stock. Cheapness is attractive always but the reason behind cheapness is an important factor.

One of the exchanges

The company got other income due to stake sell into the subsidiary company which has boost earning by ~3x and due to such one-time earning P/E multiple has fallen drastically. And, this fallen P/E multiple misguide investors and attract them to make a mistake.

We have to remove the effect of one time gain in the normal business and need to take an average of the 10 year or entire cycle for elements temporary and extreme profitability effects.

If businesses into the cyclical nature then it is advisable to take an average of past seven to ten years or a business cycle earning average for nullifying the effects of ups and downs into the earnings due to changes into the cycle. If we focus on the earning at the best cycle then we can attract to buy and end up with the losses or has to wait till the next good time of the cycle. Reversely, when we focus on the worst cycle then we avoid the opportunity and we end up with the opportunity miss.

We are habituated to buy at the lower P/E and sell at the higher P/E but the same is not applicable in the cyclical industry. We have to buy company during the bad cycle which has depressed earnings that shows higher P/E and need to sell during the good cycle which has good earning that has depressed P/E. So, if we buy at the lower P/E then we end up with losses though P/E will be increased. Also, higher-earning is temporary and as the cycle turns out then earnings will disappear.

We can start reading an annual report from the backside so that some facts which the company wants to hide in the last section which comes first to us. Always read footnotes, focus more on learning about financial reporting.

We have seen that equity investment has provided decent returns to those who have made an investment into a decent business with having decent management. I have also explained a similar concept to my articles of Pat Dorsey and Kite Flying regarding business + management combination.

Accounting is a language of business, we need to understand it well so that we can make communication with numbers.

I will try to explain all manipulation in a simple manner into the upcoming issues of the same series.

I have tried to cover up concepts available with the above books.

For Detail Issue, Click here —> SIMPLE IS BETTER – ISSUE -16 – NUMBERS TELLS YOU EVERYTHING

Accepting mistakes – Mr. Buffett has accepted mistake of poor equity performance during the year 1999. Though they have a wonderful track record, they do not get trapped with the overconfidence, does not show any excuses, stay down to earth and stick with the reality.

One of the footwear company in India

One of the diagnostic chain company of India

Mr. Buffett has given his view on Tech Companies –

Business with a valuation –

Mr. Buffet has mentioned that line between speculation and investment is not clear and blur so we have to identify the investment process according to our course of action. The definition given by Mr. Benjamin Graham can be useful to us for identifying investment process – “An investment operation is one which, upon thorough analysis, promises safety of principal and an adequate return. Operation not meeting these requirements are speculative.”

One of the Cable manufacturing company

One of the spirit company of India 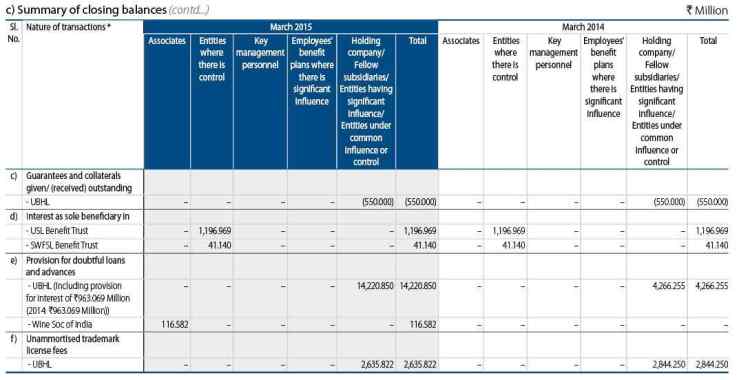 We have seen into the current scenario that when people have started believing that investing/speculating to the equities provides them a higher return (no one remembers what Ben Graham said for return – should expect reasonable return) then only bubble started to build up.